There are some teams that can be said to have changed the course of football.

The great Hungarian side of the 1950s, for example, changed the tactical landscape of the game by using players in different position slots than most people were used to. Milan of the late 1980s and early 1990s introduced us to a more collective style, the man-to-man defense of which was balanced by the ability to attack as a single unit when they were in possession.

However, there are few teams that can be said to have changed football twice in a relatively short amount of time. Barcelona is one of them.

First, the Dream Team, which was trained by the great Johan Cruyff, combined the Dutch principle of total football with the Spanish style of possession.

One of the players who flourished under the leadership of Cruyff was Pep Guardiola, who played as a crucial single pivot at the base of the midfield. Guardiola was appointed Barcelona coach in 2008 and began to implement a style of play that took over concepts from Cruyff's team and combined them with his own modern view of the game.

At the end of the 2010/11 season, Barcelona reached the final of the Champions League, where it would face Manchester United. This game has more than any other highlighted the impact Guardiola had when the Spanish club won the game 3-1, but dominated to the extent that United barely saw the ball.

Indeed, United manager Sir Alex Ferguson was exuberant in his praise after the game, stating, “Nobody has given us such a hiding place. It is a great moment for them. They deserve it because they play properly and enjoy their football. "

Let's provide a tactical context for the game and show the key points that have made Barcelona so dominant.

IMPORTANT TO BREAK THE LINES

Football never stands still – even now in a lock-up – and in the nine years since this game the tactical side of the game has evolved, and now the concepts we saw in this Barcelona game are fairly common.

This was further supported by fans' growing interest in tactical analysis and writing. Now we often speak of players who break the lines of the opposition by dribbling or passing. This simply refers to the ball moving across a line of opposing defenders.

In 2011 there was still a shortage of players who could play passes, which broke the opposition line in key areas. It was more common for teams to attack in wide areas before trying to hit the ball in the middle.

Barcelona started to change everything.

The midfield of this team from Barcelona was of course world class. Sergio Busquets was the only fulcrum at the base of the three midfielders in the position Guardiola previously held. In front of him we saw Andres Iniesta and Xavi together.

The two advanced midfielders complemented each other perfectly with a mix of passing and the ability to move forward in possession of the ball. All three midfielders developed in the club's youth system felt that everyone knew exactly what the other was doing and where he was going.

In the example above, we see Xavi owning the ball and United's midfield slowly exerting real pressure. Iniesta runs to break the line of the United midfield and reach the highlighted place. With Xavi's composure, he can wait for the run to finish before moving the ball forward to find Iniesta's run.

This time we see busquets moving forward in possession of the ball while United's midfield is a little lower. Once again, Iniesta is the key as he takes a high position right on the blind side of the United midfielder, and the pass can be played into Iniesta's feet in that position. In these areas, Iniesta would take possession and turn at the same time to drive into the highlighted area and threaten the U.S. line of defense.

During this game, United tried to come to terms with the movement and positioning of the midfield of Barcelona as it took up space between the lines and the ball kept passing beyond the midfield.

We should point out that this Manchester United team was by no means poor. They had already won the Premier League by 11 points over second-placed Chelsea and played attractive, offensive football. Still, her opponents seemed to be playing a different sport here.

Manchester United was used to competing against teams that played effectively in straight lines. The players stay in their position slots and the ball moves in known patterns. However, Barcelona did not stick to a pattern that United coaches would expect, and instead, the movement of both players and the ball made it very difficult to defend effectively. Much of this is due to the player's rotations from the ball.

The rotations we saw when Barcelona moved to the last third were different depending on the side of the field. Above we see an example of the type of movements that we would see at Barca to move forward on the right. Dani Alves, who played as a right-back, was a player who felt comfortable in extremely high positions and whenever Barca was in possession immediately went forward.

During this move, the right-wing attacker, either David Villa or Lionel Messi, moved in to make room. We see this above when the ball is played on the right side where Alves moves forward into space. Villa is drawn inward, and these rotations force United defenders to choose between pursuits or keeping their defenses. The movements on the left were different, with left-wing attacker Pedro tending to stay wide and left-back defender Eric Abidal taking deeper positions in possession. 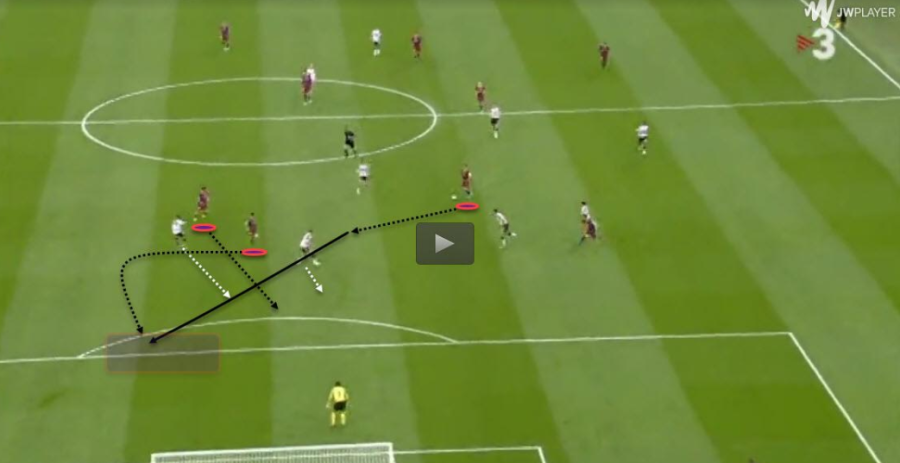 These rotations in the last third made it very difficult for US defenders to persecute and effectively defend their husband. This is a moment from the preparation to one of the Barcelona goals. With Xavi in ​​possession, United is struggling to put effective pressure on the ball. David Villa is the most advanced player and Messi steps behind him for support.

Messi makes a sudden move behind the striker to threaten the space behind the line of defense, and this causes United defenders to fall behind. Villa delays his movement and then curves his run to the other side of the box. A simple pass from Xavi, who has been waiting for the piece to develop again, allows Villa to touch before he shoots home. Again, rotations have made room for positions, allowing Barcelona to easily play through the United defensive block.

United's defenders were either pulled out of position or pinned and easily overtook.

One of the biggest criticisms of this team in Barcelona was that they were guilty of only passing the ball on to pass. In possession of the ball, the ball often moved quickly over short distances, even if the opponent did not exert direct pressure. However, people often missed the point of these quick and short passes. You should win the opponent for the ball, and this in turn would create space that could be used elsewhere.

If these short passes were played forward in advanced positions, they should pin a defender in place before the attack's focus quickly shifted and the defending side was out of balance. This is something we saw a lot in this game when Barcelona pulled the United defensive block into areas where they wanted it before it quickly changed the angle and pace of the attack. 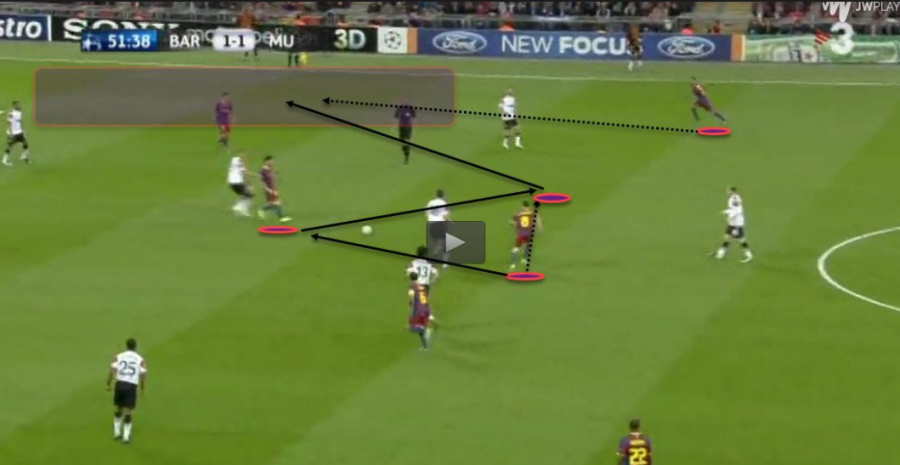 We see this here when Barcelona tries to bring the ball forward. The first pass goes to Villa's feet as it moves back to the ball. This move has drawn United's defender, Nemanja Vidic, to the ball. Villa simply puts the ball back at a slightly different angle and when Iniesta moves, we see Alves moving quickly into a high position. Iniesta can then play a simple pass to find that run.

One could argue that Iniesta could just hold the ball and then wait for Alves to run before releasing the pass. However, this misses the point. The first pass at Villa is important as it picks up Vidic and automatically adapts United's defenders to the ball. The second round back to Iniesta and the third round to Dani Alves are then carried out quickly before United can adapt properly. This creates the space that Barcelona needed to play through the United block.

This match was probably the highlight of Guardiola's Barcelona. It provided the platform, audience and opposition that proved the effectiveness of the game model created. The secret behind everything that Barcelona did from a tactical perspective revolved around the intelligence and skills of the midfield, of course combined with the genius of Messi.

United was pulled across the field and consistently thought. It is significant that this is a match from which we can learn so much in terms of tactical concepts and execution.

Freiburg Fall in their Battle with Bayer Leverkusen